This past weekend the wife and I decided to jump in the spontaneous-lane and visit our local multiplex to take in the new zombie Romeo & Juliet flick Warm Bodies starring BBC “Skins” and About A Boy alum Nicholas Hoult and Teresa Palmer  of Take Me Home Tonight (who here looks alarmingly like a blonde Kristen Stewart).

Nicholas plays a zombie whose name (he thinks) may have started with an “R”. So he simply goes by “Rrrr”. Teresa Palmer plays an uninfected human named Julie. R and Julie. We get it.

For fans of the original Shakespearean text, the writers throw in a few additional touchstones here and there. Such as, Julie’s boyfriend at the start of the film is called Perry. Juliet’s almost-betrothed (prior to meeting Romeo) in the original text was a fellow called Paris. Paris. Perry. Nice. We get it. Julie’s best friend Nora  as the equivalent to Juliet’s confidante the Nurse. Nurse. Nora. Nice. We get it. Rob Cordry plays R’s zombie friend “M”, which is M for…. well, you get the idea. And of course there is a balcony scene. Nice. We get it. 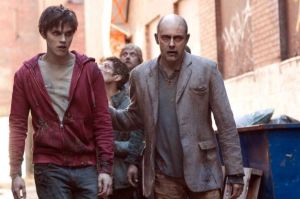 I got your back, dead-bro

Despite my seeming to sniff dubiously at the crossover of characters and basic plot-lines, I actually really enjoyed this movie. It has some decent old-school zombie violence as well as a, shall we call it, “heart-warming” love story.

I love you for more than your brrraaaaiiinnnsss

The best part of the flick was R’s ongoing internal monologue which is largely self-deprecating humor. I also must admit that the way R and Julie meet is perhaps the WORST possible way to meet someone (e.g., eating your future love interest’s boyfriend’s brains).  I doubt that we’ll see anything like that in a film again. But it was also kind of awesome.

Overall, I recommend this fun, comedic, zombie-fied riff on R&J. Get thee to a cinema and BRRRAAAAINNSSS.