I had never been to the Oregon Shakespeare Festival – although about ten years ago I had hatched to plan to move to Ashland, OR, the small town where the festival takes place.

Although those plans never came to fruition, I finally made it to the little hamlet a couple of weeks ago to see one of my dearest friends star as the second lead in the world premiere production of The White Snake – written and directed by Tony Award-winner Mary Zimmerman.

The White Snake is based around the Chinese folk-tale of a two snake spirits (white and green) who, after spending 1700 years studying the Tao, decide to leave the safety of their mountain dwelling and disguise themselves as female humans to spend a day among mankind. White Snake falls in love with a young pharmacist’s assistant  called Xu Xian and, with the help of her best friend Green Snake, manages to woo the young man, marry him, and help him to open his own successful pharmacy. Fa Hai, a Buddhist priest recognizes the true identity of White Snake and wreaks all kinds of havoc. The end is bittersweet, with a sort of “love conquers all” moral. 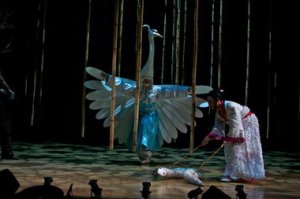 The production of The White Snake was amazing. Writer/Director Zimmerman used a patch-work of theatrical tropes and traditions to quilt together a beautiful re-telling of the folk tale. Within the staging she not only acknowledged the many different versions the story with cute “it might have happened like this… OR like this” moments (think the end of the film Clue), she also incorporated a hint of Greek chorale narration and direct-from-the-textbook rules for making an entrance in Chinese theatre AND also threw puppetry on top of it all like an adorable, symbolic, cherry.

The role of White Snake was beautifully and adeptly portrayed by Amy Kim Waschke. Her sprightly companion Green Snake, was played with delightful vim, vigor and capriciousness by (my friend) Tanya McBride. White Snake’s love interest Xu Xian was played by the charming and sweet Christopher Livingston. Rounding out the main characters was an excellently evil Jack Willis as the devious monk Fa Hai.

While it would be easy to just say that my friend was great and leave it at that, I feel I must clear away any assumptions that I’m saying she’s great only because she’s my friend.

I hadn’t seen Tanya perform on stage since high school. This was not a short time ago…our ten year reunion has long since come and gone. I truly had no idea what to expect. I was resolved to be supportive, of course, and previous notices from her work in Chicago led me to believe that she would be quite good; however, nothing is more heart-stoppingly awesome than seeing someone whom you care for like family not only succeed in their art, but do EXCEEDINGLY phenomenal work. I am so proud of her my chest hurts with glee.

If you are any where near Ashland, OR this spring and early summer I urge you to check out this production. The performances, the staging, the beauty of it all will overwhelm you.