It’s Wednesday and I’ve started writing my post for this week. I usually try to have updates posted on Fridays… lately, I’ve been slacking. Sorry about that.

Part of my writing struggles recently is that I just don’t want to write about what other folks in the world of “geekdom” are writing about. I’d like to stay unique, if I can. This has limited my choice of topics.

When I find myself struggling with a block, I generally think, “Oh well, I’ll just take a situation that happened this week and look at it through a ‘wacky’ lens, and then it’ll be funny and I’ll have something  posted.” The problem with this is that even though I can be wacky, I don’t live in wacky. I have a frustrating bent toward the logical, which is not helpful when you’re trying to find the absurd in everyday situations.

I am not a natural humorist in this regard.

I am great off-the-cuff, especially while watching TV. Just watch my wife put up with me MST3K-ing every “original” show on Syfy. Admittedly, this is the low-hanging-fruit of comedy but, I’m good at it. 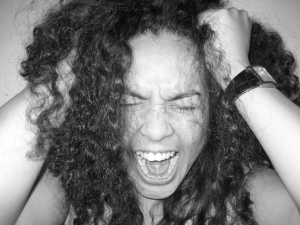 Would you stop telling jokes?! I am trying to watch Tiffany beat up Deborah Gibson!! (*note: not an image of my actual wife)

Writing comedic essays is a different animal. It’s almost like writing a stand-up routine, but with no chance to workshop it in front of an audience to find out what works before you go to press.

I second-guess myself a lot, thus destroying the “off-the-cuff” stuff I’m actually pretty decent at.

Maybe I should have studied philosophy, then I might be more able to look at the world via an absurdist viewpoint. The thing about philosophy is it demonstrates just how pointless most (read: all) of the constructs of civilized society are, while giving you the intellectual tools to talk about it.

I was also never a member of a debate club. Debating gives you the ability to argue even the most ridiculous of ideas into the ground, no matter whether you agree with them or not (just look at a large selection of Congress…or the current Presidential debates). Debating is arguing for the sake of arguing, but making it sound high-fallutin’ and like it comes from a place of intelligence thanks to the use of fancy wordplay.

Philosophy + Debate = Cynicism… which can also lead to comedy.

But, I don’t want to be a cynic. Just look what happened when Stan contracted “cynicism” on South Park. Everything turned to crap. (I originally wrote “carp”, but realized that didn’t make any sense and also seemed bit fishy).

"The Doctor says I have cynicism..."

I prefer to be goofy. I adore absurdist humor. Just look at my banner art, or my penchant toward flan. Flan is the funniest of desserts. I mean look at it… plus it’s called flan… who calls something “flan”? What chef invented this pastry and when finished looked down at it imperiously and stated in a booming voice, “And I shall call thee FLAN”, then promptly adjusted his poofy hat in satisfaction?

Yo! Who you calling "absurd"?

Finding the absurdity of flan is easy. What can be hard is viewing most things as being just as absurd and writing about them… all the time.

So, I hope you’ll all forgive me for using this week’s posting as an opportunity to write myself out of writer’s block. Imagination and Creativity are both mental muscles… and the only way to keep them working optimally most of the time is to keep using them…the bad side of this exercise means occasionally turning out self-indulgent, whiny, “but writing is haaaard, wah” pieces like this one. 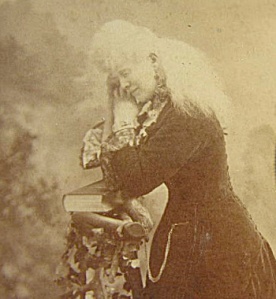 Woe is me! How shall I ever write again! It is too, too dreadful!

I’m grateful for you letting me churn this one out. I can’t guarantee next week will be a complete return to the “wacky world of me”, but I can definitely say that it won’t be another whine-fest.

Ya’ll have a great weekend!!!