Ok, so my post last week was about how I’d gotten myself in over my head with this year’s Halloween project. Did I successfully pull it off? YES! But, ultimately, for no one’s benefit but mine.

There’s this new trend in Halloween celebrating called “Trunk or Treating”, and I don’t like it. I don’t understand current parents’ fears of taking their kids into neighborhoods to trick or treat. If it’s worries about “razor blades in apples” or “poisoned candy” it has been proven over and over and over and OVER again that these dangers are only urban myths. Halloween is the only opportunity many kids (and parents) have these days to meet and greet with their neighbors.

This latest pressure to drive trick or treating out of the neighborhoods and into church or community center parking lots under the auspices of “it’s just safer” is (IMHO) a huge mistake because then not only are the kids missing out, so are folks like me and my wife who go all out on interactive Halloween displays.

I take great joy in crafting new effects for my display each year, but it’s not just for my personal amusement. So much of the fun comes from the reactions of the kids and their parents.

Maybe it’s just my neighborhood, you might say, and this may be true to an extent. But we had three times as many trick or treaters last year as this year… and wouldn’t you know it, last year the church down the street didn’t host a Trunk or Treat and this year they did.

I was initially hopeful that this would mean more treaters down our street. They’d go to the church, and then venture into the neighborhood to complete their stockpile of goodies. Could not have been more wrong.

Anyway, enough of my complaining. I had promised photos of our display… so I won’t hold back any longer 🙂 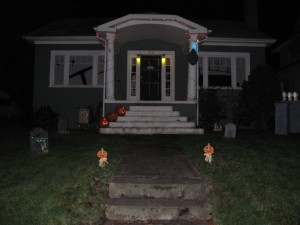 Basically the same as last year, except for the addition of the heads on the right... 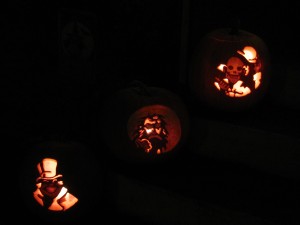 The Hitchhiking Ghost Pumpkins turned out GREAT this year!

Is this haunted porch actually stretching?? 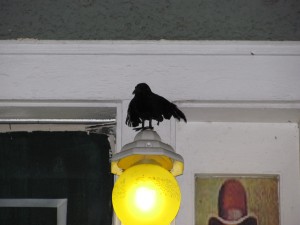 It's all about the details...

And here they are! Singing their heads off 🙂 Surprisingly difficult to catch the effect on-camera, though...